Home » Mag » Fanu the FatGyver has the cold rocking beats

In nearly 30 years in the music business, Fanu FatGyver has done it all.

Finnish producer Janne Hatula, aka Fanu and FatGyver, has been making electronic music for nearly 30 years, with an eclectic approach, to say the least.

In fact, he has been able to explore the boundaries of breakbeat music, expanding his sound in many directions. As Fanu, he has released drum and bass records on several indie labels such as Subtitles, Offshore, Commercial Suicide. He has also started his own imprint, Lightless Recordings.

His music has been featured in the catalogue of respected labels, such as Metalheadz and Ninja Tune. He has performed around the world as a DJ and live artist. As an in-demand mixing/mastering engineer, he works on all sorts of electronic music, as well as Hip Hop. The FatGyver and the golden sounds that never go out of fashion.

Finally, that good old sample-based hip hop, as he loves to call it, is Fanu’s passion. Under the moniker of FatGyver he has recently released Adventures In Imperfection, his new foray into the borderlands of hip hop and funk.

The Finnish beatsmith conjures an “East Coast” mood that evokes smokey urban landscapes and dimly-lit nocturnal city streets while sporting samples from The Office, and fresh break-beats. A “New York State of Mind” kind of music straight from Helsinki…could you figure it out? We have asked all about it to the man himself.

Fashion comes and goes, while style stays – after all, it’s not like The Ramones ever changed much, either, as their recipe simply worked – and the same can be said about hip hop. – The FatGyver

Let’s start with the title. Adventures in Imperfection. Why the title, and what do you like about imperfections in hip hop (and in music, generally speaking)?
The title refers partly to the fact that to me, the style of hip hop I love and make has always celebrated a slightly gritty aesthetic: it’s not super honed or polished, and it’s often using lo-fi samples, drums, etc. That’s part of its charm.

I also like to sample old movies and music, and they do sound quite imperfect, but that’s why it’s so great. A lot of the music we hear today is honed to perfection, and I think “beat tapes” like these are always a very refreshing change.

I also make my main living as a mixing and mastering engineer, and we’re often chasing the most ideal and “perfect” sound for the music, and to me, this type of music is a nice escape from that.

Life is all about imperfections. Like John Peel said, “Life has surface noise” (as a response to someone criticizing vinyl for having noise). Eckhart Tolle said something like the more you try and control your life, the less control you have over it…

So your perfect plan hardly ever works out all perfect, but then again what comes out of it may be pretty great. If you think about plans when you travel: you usually don’t follow your plans perfectly but end up doing this and that instead but it all turns great. 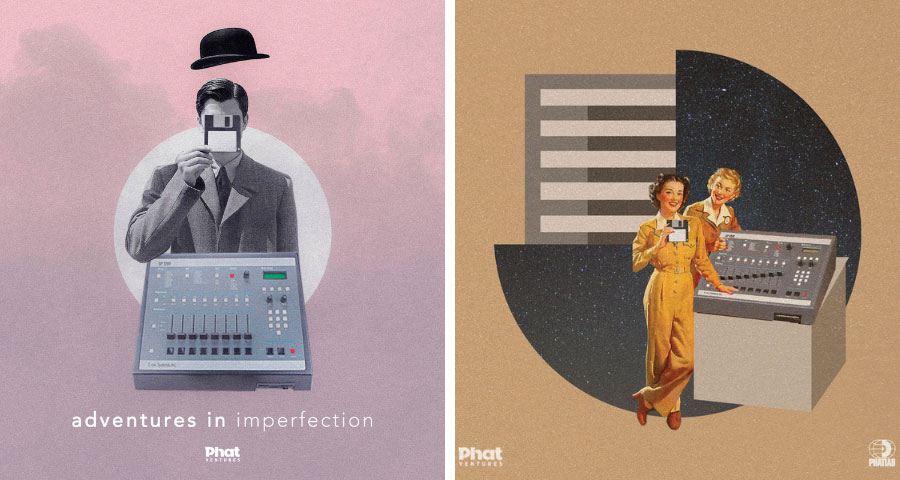 The mood of the album evokes a specific period in hip hop, its equipment, and quirks. What you like about that period and which feelings you were trying to bring back?
This all relates partly to what I said previously. A lot of the old stuff we cherish is very imperfect: their sounds, arrangements, and some aesthetic choices may be a bit rugged, but the contrast it creates to all the stuff that is so polished these days seems to work and appear appealing.

The feelings I want to evoke are sometimes a bit dreamy but also funky, groovy… kind of organic. I’ve always liked organic vibes in hip hop. I don’t do that hard-slamming street stuff; I like to go kind of easier. I guess a relaxed feeling is what I cherish the most.

Talking about equipment, the cover is pretty self-explanatory, but you have incorporated many famous samplers in your music (AKAI S-900, S-950, MPC), and you are also an Ableton pro-level user and trainer. How was your workflow for this project? Did you have a recipe you followed for all the tracks or were they conceived in different ways?
I never really have a recipe; I usually start working on a loop that evokes a certain mood and just builds the song around that. Sometimes I may start with some older gear and record some 32 bars out of that into my DAW and work on the arrangement further there, edit it, mix it, etcetera.

The mood has to work from the beginning…it has to make my head nod and think this is the type of music I’d pay for. I try to stay away from formulas in both song structures and also my own workflows. It’s not always easy.

I want to offer stuff that’s at least slightly different from what others do. I don’t think I’m reinventing the wheel or that I’m some musical saviour – not at all – but at least it’s not mega-generic…I hope, and to know whether I’m right or full of sh*t you’ll just have to listen to the album to find out, ha!

I can hear at least three different “Hip Hop Eras” that you homaged in Adventures. Was it something that you planned to begin with, or did it just happen spontaneously since we are talking about hip hop gods? Did you consciously say “I am going to try and do a bit in the vein of… ” for any of the songs in the album?
What I do musically is very little a conscious process…that is, I really just try and create something that I like, and I go from there, and I don’t plan things much. It may sound very old or modern, and as long as the vibe fits, I push ahead with it.

But while I may not have a plan, I usually have a mood in mind I want to chase. To me, planning a song doesn’t always work anyway, and I’ve felt that songs often kind of write themselves as you get going, and my best tip is to go with that flow, even if it’s very different from what you planned initially.

It’s like sometimes your hand is guided by some divine being of musical inspiration…so let it guide you, ha! That’s how it often goes for me.

I don’t feel I am trying to pay homage to anyone or such, but I’ve heard DJ Bailey say twice my stuff reminds him of DJ Premier, and that’s a compliment. We’re all products of what we’ve heard and liked up to this point, I’d say. 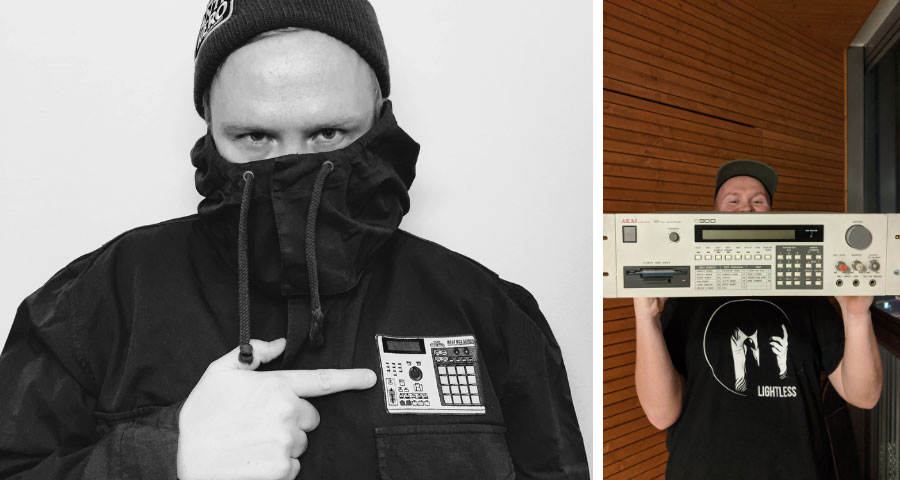 In your music projects, whether it is D’n’B or hip hop, you like your drums hard, generally speaking. How do you go about getting that Fanu hard knock in your drums?
I try and pick sounds that will lend themselves to that hard-hitting vibe. I often saturate drums a bit, sometimes with my analog Soundcraft Series 200 SR desk.

In the DAW realm, I use whatever saturators, Pultec EQ on kicks and busses, etc.
Just running the signal hot in analog-type ways is good.

The music in Adventures in Imperfection is obviously sample-based. What is your ethos when sampling and what do you do to keep sample-based music fresh and original?
I mostly want to sample things that I either haven’t heard a million times or at least it has to be something I feel I haven’t heard. I sample cheap records, movies, TV series, etcetera. I’ve been binge-watching the old MacGyver series, and today I found some gold on it!

I’ve sampled the old Twilight Zone series a lot. Black and white movies, Jim Jarmusch movies…stuff that’s not so “obvious” gets me going. Just watched the old Klute movie again and realized I have some nice samples from that too I want to use. To me, stuff like this makes it really interesting.

I absolutely don’t diss sample packs, and I’ve used some, but to me, the chase is half the fun…it’s a big part of the whole sport. A journey/destination thing.

You suggested that the album will appeal to fans of DJ Krush, Pete Rock, DJ Premier, Luke Vibert, Marco Polo, Damu The Fudgemunk. Is there any producer/musician that influenced you for the creation of this album that might not be obvious when listening to the songs?
Hmmm. Interesting question. Not necessarily one producer, but a lot of 90s acts and 90s-style acts…producers that keep sampling alive. I guess The Future Sound Of London, while not stylistically similar, opened my eyes to the world of sample-based music.

I mean, a lot of people might say that you don’t have to sample to make good music, and while this is 100% true, I often find the sample-based stuff to be the most interesting and organic, whatever the reason. I mean just listen to the old FSOL stuff!

An inevitable question, as I live in Finland: how do you think being Finnish influenced your music? There is certain humour Finnish people have that seems to pop up in this project as well…
Yeah, the humor aspect for sure. Shit, man, to deal with the lack of light in this country, you can’t get too grim. Gotta laugh at things. I don’t take life too seriously. Being Finnish has definitely influenced my Fanu stuff 100%, the drum and bass “otherness” vibe.

I’ve always found the lack of light fascinating as it leaves a lot of room for interpretation. I lived in the Finnish countryside till I was 20, and it was cold then, too, and I’ll say all that definitely shaped my DNB sound at least – I mean, to clarify my point: if I had lived in Miami, I might sound way different, you know?

Any final words for our readers? You can plug your Phatventures company or anything else you want…
Peep fanu.bandcamp.com for my music. If you want world-class audio engineering (mixes and masters), holla at me.

To listen or buy Adventures in Imperfection, please visit:
Bandcamp
Apple Music
Tidal
Spotify
Beatport
Or preview it on Soundcloud.