Giallo Point and his grimy delivery: enter the man from Crate Divizion.

It is no longer a secret: Giallo Point has made a name for himself over the past few years. We’ve first heard from him with some suitably grimy beats for Long Island rappers Smoovth and Hus Kingpin, in 2014.

Alongside his partner Vic Grimes he manages the Crate Divizion imprint, proponent of a sound inspired by the darker side of library music, and akin to the more hardcore of the New York scene. 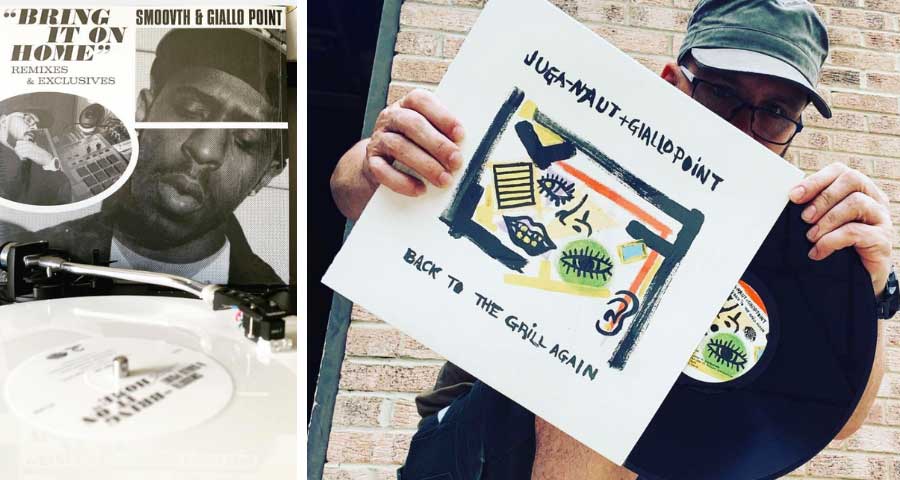 Giallo Point with some hot wax he produced

The incredible taste for the obscure meets the grimiest New York’s heralds.

His taste in obscure sound libraries and digging extravaganza to the most infamous “charity shops” across the United Kingdom made him a top player in the rap game of the past decade or so.

Among his fluent output, we can for sure mention the Beats for Drama series, the opening act to numerous collabos with the most revered underground emcees of the past few years.

There must be a reason if the likes of The God Fahim, Estee Nack, Him Lo, Sonnyjim, just to drop a few names, decided to bring onboard the elusive British producer to take care of their sound.

Unstoppable and ruthless to this very day, he’s here with us for an actual update to our first discussion, as we’ve met him originally in 2014 to discuss his beat-making style and production.

Don’t tell us we sleep, innit?

The rising of Giallo Point: the origins of the beat-smith.

What was your first commercial beat sold/placed?
That’s a good question, man! Well, I think it was like around a year or so ago, on the whole, SoundCloud thing, connecting with dudes. It was actually a connection I made with New York crew BPM 718 (Elijah Miguel, Doc Ahk & Jay Drilla).

I basically sent these cats a whole bunch of beats and we came thru and made the EP The Awakenin’.

We were working back and forth via e-mail, I took care of the whole mixing of beats and vocals etcetera, so yeah, that’s where it really started globally, I guess.

When we first interviewed you, in 2014, the talent was already there but maybe not the recognition. What do you think has changed in the last few years in this respect?
I think underground hip-hop is really live right now, and I think a lot more people are starting to tap in. Working with a few different artists has brought fans from all sides in. So this definitely has brought more exposure.

What is the project that you think has changed your status and opened doors that maybe you were struggling to open until that point?
Working with my guy SmooVth has definitely been a big influence, I’d say that’s the most recognisable chemistry for a while now.

How long did it take you to produce something that you were proud of, at the beginning?
Well, I’ve been making beats since around ’99 when I first picked up the Akai-MPC, but what I’m most proud of right now is the Crime Beat series that I’ve been working on, it’s the Beats For Drama series on that library crime type feel.

I know the beats won’t be everyone’s cup of tea, but if you like hard drums, dusty samples and the whole spy crime style from the late ’60s, early ’70s, then these are definitely for you.

What’s Giallo Point favourite production setup?
The favourite set-up would have to be MPC 2000XL & Logic. Not too much, as I believe you can have all the kit in the world but, at the end of the day, the dopeness will come from the individual.

Has your production workflow changed in the last few years? Have you integrated new tools into your arsenal or are you still strictly MPC-based?
Never changed a thing, MPC 99% of the time.

Recently you have started making beats on your phone with Koala, an app that has created a very enthusiastic community of beatmakers exploiting the limitations of the program to make the most of it. What do you like about it, and does using Koala help you to keep your creativity fresh?
Yes, Koala has great simplicity and has a dope workflow that really matches how I like to create.

What is the state of the Crate Divizion collective? Does it still exist?
Oh for sure, it’s me, Vic Grimes & PhybaOptikz. Still got a lot more to come.

Internationally known: the past and future projects for the producer.

In the last 5 years only, you have collaborated with people like Tha God Fahim, Napoleon Da Legend, Daniel Son, Him-Lo, Buze Brovaz, SonnyJim and so on. Does collaborate with different artists always follow the same pattern, or things are different every time? Is there a general collaboration process?
It’s all pretty much the same process but the hardest part is making sure the beat styles always connect.

What are the differences between the collaboration with British rappers and American rappers, in general?
Nothing at all really as long as the chemistry connects then the process stays the same.

I am not going to ask you what your favourite project is, but maybe we can talk about the most challenging ones. Which projects created more difficulties?
Sonnyjim, lol. That project took a while and a lot of going back n forth to get it right. Shout out Sonny though that’s one of my favourite guys over here.

Is there any particular rapper you would like to collaborate with, that still has not materialised?
Kool G Rap. I’d love to do an album with for me the greatest Mc of all time. 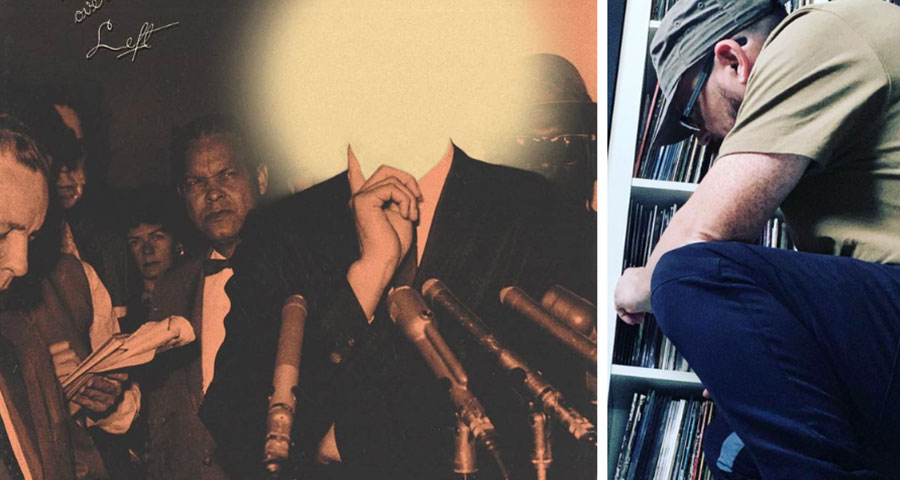 Giallo Point digging in his own crates, and the artwork for “Right Over Left” with Nowaah Tha Flood

You are known for your classic bangers. Has your inspiration changed in the last few years? Who are the beatmakers that inspire you to go the extra mile when making beats today?
There are many different beatmakers that inspire me, I take inspiration for so many guys but that’s also music in general, all types of genres inspire me, you have to have this in mind when sampling too.

Giallo’s main tips: dig for the unexpected, then mix it correctly.

What the best digging advice you’ve received from someone ever if any?
Man, well my good friend Deejay Random (Steel Devils) always told me to think outside the box, ya know…There’s breaks or samples in every style of music out there. Be open to check for stuff you may not feel immediately. Most of all, have fun with it.

Producer, in the last 3 months, that made you say: “Oh, shit, I have to go back to the lab!”?
That’s easy: Alchemist man, the Step Brothers…Those beats way out there, no one on Alchemist’s level right now.

Your worst production mistake ever made?
Lol, I was booked for studio time to throw some beats on a project and I didn’t back up my floppy discs when I got to the studio, the disc wouldn’t load and tracks were lost lol…That project never made it. Those MCs were pissed!

One essential mixing tip?
Just make sure the mixes are to your best quality they can be, I mean the drums gotta have punch! Always ask for opinions from other musicians or beatmakers, don’t be afraid to go over and over to get that best sound.

It might sound a bit of a random question, but I do not think it is. Last year, we had the pandemic and the final stretch of the Brexit debacle, which have unquestionably affected lots of people.

Has the general situation affected you as a musician as well, you think? If so, how did you counteract the negative vibe?
It’s been a huge impact on everyone’s lives, and naturally, in these times these moments inspire even more to be a better person and never stop creating what you love.

You have a project out with Him-Lo, a frequent collaborator. Why do you like to make music with him, and what should we expect from the project?
Him-Lo is not like any other guy I worked with his pen is so sharp and has many swords to his style.

We really connect on a musical level and the tracks come so naturally, when that chemistry hits like that it’s the best feeling working with someone you respect in full.

Any final word for your fans? This is where you can plug anything you want…
Sure man
@giallopoint – Twitter
@giallopoint – Instagram
Thank you to everyone following the movement and look out for lots more this year!

Must Volkoff: looking for originality in beat-m...

Production tips and some extra Down Under vibes from Australia

MessToo: the pure definition of outsider