Clas K is a relatively known beat-maker, but… 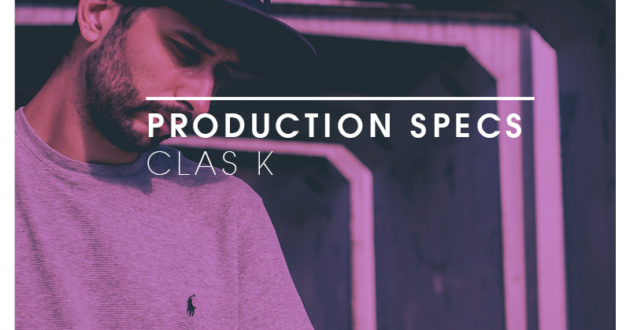 Clas K is a name in some ways new to most. Active as a producer, sound engineer and deejay for almost a decade now, he is a beatsmith with a low profile and high fertility, as well as eclecticism. Jumped to the headlines first with his group, Fool Effect, with which he toured in Italy and abroad, and more recently thanks to the collaboration with FFiume on our own imprint in the project Underlife , today’s guest is as discreet as he is musically dynamic, both in the studio and live. A beat-scholar of hip hop sound, a precise and punctual sound engineer, Clas K does not disdain sorties in territories different from the more usual boom-bap. In fact, his trap solutions are interesting, winking at a more modern sound, and the sound of different realities of the Roman underground, too, the one from which he himself comes from. A lover of very dense atmospheres, a harbinger of dark jazz, with veins of electronics and arrangements that are as simple as they are effective, we have heard him bring his point of view and his experience on beat-making, production, and mixing. Ladies and gents, Clas K.

The first beat sold/placed?
Placed, certainly to my man Revo, back in 2008/09, with that enthusiasm typical of kids. The feeling of a voice finally above one’s own creation is still indescribable today. It was very strong stuff, made by sampling the “banal” American soul, which I absolutely can’t remember anymore, but, as often happens with the soul, overused. I had no idea what I was doing, it was just a great desire to do and listen to new music, above all.

How long did it take you to produce something that I was proud of?
It took a long time, let’s say that I started making beats around 2008, without really knowing what a sample was, or quantization, or equalization. Having almost always been self-taught, before I had something that was valid in my ear I had to do a lot of “ trial and error “. Let’s say that the first beats that convinced me were those I made around 2012, or so, but as almost always happens, either because you listen to new stuff, you change your taste or approach, everything is done before, to a certain point, it seems unreadable. So, if today I am reminded of listening to stuff from that period, despite being relatively valid, I hardly can stand it.

Your favourite production set-up?
I’m not really a hardware guy: I know samplers, I like them, I even learned how to use them, but I consider myself a child of my time, and I don’t hide the fact that I primarily use computers. Generally speaking, I start the beats with Ableton and finish them with Cubase, with the contribution of an Akai MPK midi keyboard with which I play the bass, various synths, and the drums. In addition to this, obviously in my set-up cannot be missing a Technics 1200 turntable and a two-channel mixer.

The best “digging advice” you’ve ever received?
I’ve always been pretty lonely about digging, and I’ve never had big tips. On the selection and use of samples, in general, I have always behaved in such a way as to try to make the listener understand as little as possible, especially if he is a work addict. In the sense, the more mystery there is, the more satisfied I feel, this was my only diktat on the subject. The mystery is one of the elements that fascinate me the most concerning beat-making, if we think that we still don’t know anything about some samples used for some classics, even after twenty and more years. Hence, another one of my unwritten rules, namely trying and not taking samples that have been already used, or at least reworking them creatively, so stay away from other producers’ style. I also put a question of respect towards those who were there before me, in addition to categorically avoiding the feeling of “already heard”.

The producer, in the last 3 months, that made you say: “Oh, shit, I have to get back on the machines”?
Undoubtedly Dj Muggs, historically I have always been a great admirer of his, but now with the advent of this new wave of hardcore tunes, he has had the ability to renew itself and remind everyone that he is the inventor of certain things and moods, and nobody can compete. The dustiness and acidity of his beats in the projects of Meyhem Lauren before and now of Roc Marciano are nothing but a confirmation of the fact that he is still the king of this stuff. I have undergone all his evolutions, from Cypress Hill and Soul Assassins to Kill Devil Hills, up to the crossover projects like the one with Cross My Heart Hope To Die, and he is one of the few who made me almost every time jump out of the chair from amazement, and the works of this last period confirm this.

The worst production mistake you ever made?
The times when I was very young and I had my first sampling approaches, I happened to pitch the sample without following the speech of the octaves and semitones, often coming to touch nonexistent tones, which could even be okay, somehow. The problem was that when I played the basslines over samples, for example, the bass notes didn’t take the ones of the sample, not being “natural” notes, so I was forced to pitch the bass, too. Obviously all strictly by ear, lucky me shortly after they pointed it out, and I corrected the shot. No further comment.

An essential mixing tip?
In an age where the role of the compressor in the mix has sometimes become that of the joker, or the common denominator, I have noticed that many sound engineers tend to abuse it or use it without criteria. The compressor is a delicate instrument, in some cases, it is necessary to use it, but in general, the less you use it the better. In other words, if there are alternative methods to reach the same conclusions, it is appropriate to consider them. Let me be clear, I’m not demonizing it, on the contrary, I use it often and am also very keen on the “creative” use of a compressor, as long as it is always used on the right occasions, especially in these times. By now we have reached quite high loudness standards, even in rap, and in general, in all pop music, and in the mastering phases the product is leavened properly (sometimes more than necessary), so I think that at least in the mixing phase you need a reduced but intelligent use.

Enter the unquantized world of Emshi, where soft beats are crispy.