Home » Mag » The Ultimate Papetti: a tribute to Fausto Papetti

The Ultimate Papetti: a tribute to Fausto Papetti

A badass selection of funky sax tunes from Big Fausto

Fausto Papetti legendary sax in a funky key, for real.

I can easily remember the very first car system my dad put on his old whip. It was a clunky radio tuner with a tape player. I can also remember the weird audiotape dad used to play for months. I mean, the same one for months.

Among those, the worst one for me was a kind of “romantic sax” tape with a crazy nice girl half-naked on the cover. It was ill, and dad loved to rock it all the time. But I was sick of it. All the time. The name of the tape was “Fausto Papetti Romantic Sax” or some like that, and it was packed with love themes’ covers. I wasn’t really feeling it, though.

Years passed by, and, around the mid-Nineties, while I was crate digging for records in a dusty crib, I found my first Fausto Papettis’s Raccolta. I bought it for a few bucks. The album cover was banging, the design was nice and the overall feeling was good.

I listened to it, and to my biggest surprise, I found a nice (and legendary) drum break Eric B got used for Rakim (courtesy of Italian maestro Tullio De Piscopo), crazy nice sounds, crazy dope loops, and overall just plain and great music.

The story of a legend: the Fausto Papetti Sax Alto and Ritmi’s “Raccolta” birth.

In the 1950s, Papetti started playing jazz in small outfits and orchestras. His own group, named The Jazz Minstrels, was composed, among others, of soon-to-become giants of the Italian music industry. Think of the likes of Giampiero Boneschi (pianist, arranger, producer), and Gianfranco Intra (jazz pianist), just to name a few.

At the end of the 1950s, after making a name for himself on the circuit, he signed as session man to Italian label Durium Records, participating in many different sessions and as many records from different artists.

During one of these sessions, the orchestra director refused to record a track whose arrangement he wasn’t happy with, as B-side of a 45 record. The story goes that the producer, who was in a hurry to make a wrap, decided to cut out the big orchestra, putting up a session with a simple quartet, like bass, drums, guitar, and sax.

Big Fausto was the man on the sax, so he came up and re-arranged the tune, making the final cut whilst rehearsing. Yes, this is it: unbeknownst to Fausto, he was recorded while rehearsing with the group. The song Estate Violenta came out subsequently, and ironically the cover version became twice as popular as the original tune.

Each “Raccolta” was an adventure in rhythms and musical creativity.

After the unexpected exploit of the first 45, Durium Records wanted Fausto to cut a full-length lp in the same vein as his previous work: pick a slew of popular tunes and let Fausto do his magic.

“Raccolta” (literally “compilation“, in English), recorded under the Fausto Papetti Sax Alto and Ritmi moniker, was the very first chapter of a legacy. The formula was simple: cut a compilation of covers of well-known and popular tunes of the time, rearranged and replayed with a brilliant sax and a crazy rhythmic section for the backbeat, in a more “modern” or “stripped down” formula, according to the latest trends and sound nuances.

Success came with ease. These records were the top choice soundtrack to many clubs, restaurants, private parties, hotels, and whatnot, before hitting the cars in form of Stereo8 first and then cassette tapes, later on. Mostly on the pop and easy-listening tip, but with a jazz sensibility. And great musicians on board. 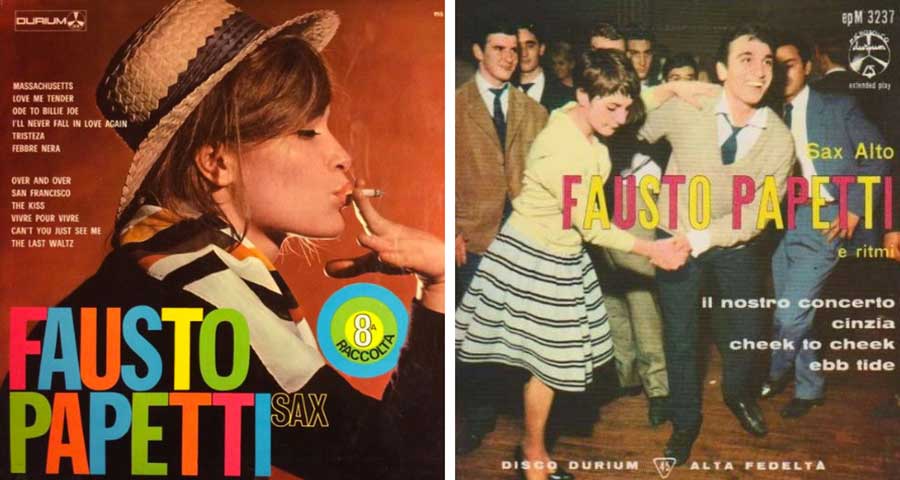 In modern days you would call Papetti’s record covers and coordinated image a form of “storytelling”, back in the Sixties it was the perfect branding of a success formula. Happy people dancing at first, then young ladies, more and more naked, helped boost the sales and the branding itself.

Many other labels (and eponyms, or copycats) tried to follow, but Fausto was the originator and the original one, putting up sales in terms of million records worldwide, from Europe to the United States.

As an excellent interpretation of their own times, approaching the Seventies, as the sound changed, the covers did too, assisting a sexy-pop deviation towards the funkier plateaux we’re going to show you…

And if during the 1960s the “Raccolta“s content was still largely tango’s and mazurkas oriented, with the arrival of the 1970s things became funkier: lp’s jackets started portraying sexy girls, and the tracklists contents went often funk and soul. Groovy thangs, also helped by the aforementioned Tullio De Piscopo on drums, and a slew of other amazing musicians. Ask crate diggers worldwide.

Aside from rearranging other people’s tunes, after a while, Fausto started writing, arranging, and putting on wax his own tunes. Occasionally, one or two original compositions would be found in almost every record, between the 8th and 35th volume of “Raccolta“, and generally speaking these songs were the real highlight of the whole set.

Being a really good musician and a jazz lover, Fausto gave birth to a mellow and intricate funky sound with just his sax and a rhythmic section, and to a subgenre with a lot of clones trying to attend his same status and fame. But Johnny, you “Sax”, and so many others did like you, too…

Still playing until the late 1980s, Fausto Papetti passed away in 1999. Gone in silence with his sax, his death has been slightly noticed. A real good cat in Italian modern music history, may he rest in Music. 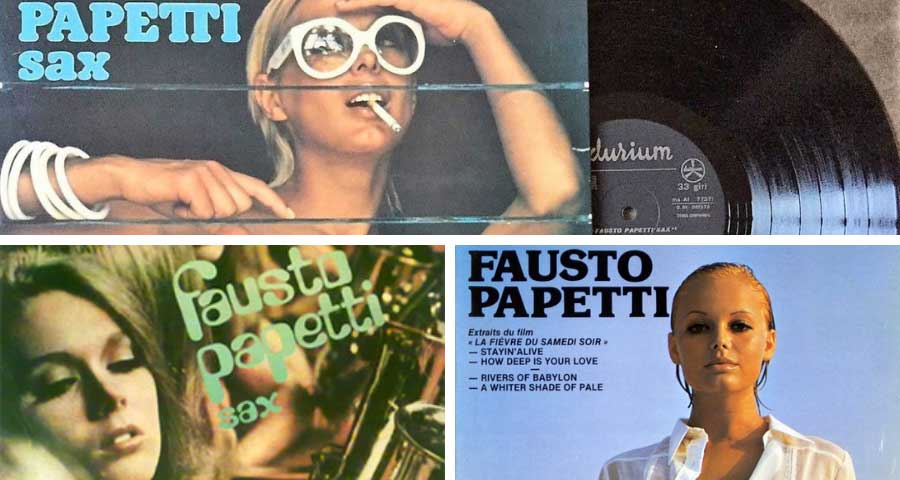 The funkier the times, the more stripped down the models on the album covers

The mixtape we’re happy to deliver today is a selection of Fausto’s original tunes, composed and recorded between 1969 and 1979, more or less. Welcome to The Ultimate Papetti go grab it!

Hope you enjoy it. My dad will, for sure.
Greetings from nowhere.

House, disco, and electro-funk mixtape with Pietro Di at the controls.

A quick interview with the lo-fi beatmaker from Naples