A brief discussion about music and visual production with l'oggetto

Disclaimer: this is not really an introduction, nor something particularly new to you if you’re down with us for a while. If that’s the case, you might probably know very well who our friend Marco Scozzaro is, that he lives in New York and he’s a multi-disciplinary artist.

Last but not least, you may also know rather well that he goes under a nice yet weird moniker, l’oggetto, for all his musical escapades, deejay sets and music-related activities. Hence, you won’t be surprised that today we bring you the man to discuss and dissect his latest official music release. We talk about some extremely dope deep house EPs aptly titled “Musica Da Discoteca “. The second volume dropped last week, and it’s almost sold out so, don’t sleep on this!

“Musica da Discoteca: Vol.1”: the meaning of the name, and why we love it as it.

The real meaning of the title, if you’re wondering, is much more than simply “music for a disco club” (which is roughly the meaning of the English translation). There’s much more to it, way beyond the wordplay. Marco AKA l’oggetto delivers a psychological essay in music, celebrating the roots of an international inspiration known as “deep house“, and at the same time drawing a flashy sketch of colourful sounds.

Those same sounds were vastly adopted in Italy’s club culture across the end of the Eighties and early Nineties and were “ignorantly” labelled as “music for disco clubs”, diminishing their own value and intrinsic existence. Quite on the opposite, L’Oggetto artfully re-uses the term coined as contemptuous, and raises it to the status of transcendental and timeless music, eternal and ephemeral at the same time.

“Musica da Discoteca: Vol.2”: the return, with some slight difference.

A joyful and thumping opera, here served in a second volume with a slightly different and more techno-ish vibe, the ensemble stays in an exquisite balance between house influences from overseas, and the right Italo-disco/Balearic touch, with a tipsy of typical Italian East Coast flavours, as the leading title Riccionese here can testify. There’s a night vibe going on here, and it must be played loud to be enjoyed in full.

Maybe, you can use it as a proper soundtrack for the following overdue interview with our friend. No doubt, you’re listening to top-quality, moustached privilege. We’ve discussed of course heritage, sound development, tools, and his latest book, Digital Deli, nothing else that “the final chapter of the namesake multidisciplinary project that uses photography, video, music, performance, and installation, to explore the current visual vernacular and the circulation of images“.

That’s definitely our cup of tea. Enjoy the reading and the ride.

l’oggetto vs Marco Scozzaro: who’s who?
My interest in ambiguity is a good way to start this conversation. To give a little bit of context, my name is Marco Scozzaro, I am an Italian artist who has been living in NY for a decade now, working in different media, including photography, video, music, and installation. l’oggetto (no capital L, yup, NDA) is the name I have been using as a producer and DJ. I like that it sounds Italian although Americans don’t know how to pronounce it!

Who’s “the Artist“?
I like to think about the artist as the mind behind Marco Scozzaro Studio, where different things happen, so to speak.

Italian Tendenza, the Artist, a concept by Marco Scozzaro

How did this whole journey start, when and where?
I have been exposed to a lot of art and music since an early age through my father. He taught me how to play the guitar and the basics of photography. On the other hand, my grandmother was a pianist and she gave me an introduction to music theory. As a teenager, I started playing guitar and drums in bands, and later I became attracted to synthesizers.

I developed a deep interest in electronic music which led me to dance music and back full circle to its roots in Black music, which is what my dad was playing at home when I was a kid. I’ve always been interested in pictures too, and I started taking photography more seriously after college when I decided to make it my profession, which then took me to NY. How did you come up with a house record and a book within the same month, last year?
I think the pandemic gave me a new perspective on things. It gave me the privilege of taking the time to lock myself in the studio full-time doing my thing and I took this opportunity to focus on what I really liked, staying true to my hard-working and uncompromising DIY ethos.

I had been thinking about making a book and a record for a long time and, tired of waiting on others, I decided to invest in it and make it happen. I wanted to share my vision without filters and make these two objects available for people who might be interested.

Digital Deli is a multidisciplinary project that spans photography, video, installation, public access TV, and radio. The idea of completing the picture with a book came a couple of years ago but I had to put it aside for technical reasons until I decided to produce it entirely in my studio.

Around the same time I started working on the book, a friend asked me to remix one of his tracks. I took the opportunity to get back to music production and after the remix was done it felt pretty natural to put my hands on my tracks again. The funny thing is my friend’s record is not out yet… 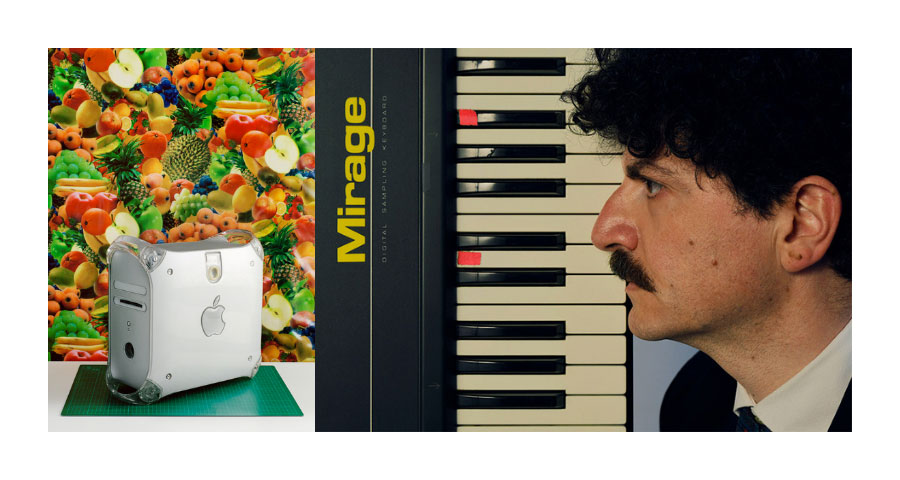 “Apples & Bananas”, as shot by Marco Scozzaro, and a portrait of l.oggetto, pic by Hugo Yu

How much does each work influence the other?
I see my practice as a continuum where each discipline influences the other. Everything I do overlaps to some degree and is related, although sometimes the hidden links might not be as obvious.

Let’s talk about Musica Da Discoteca Vol. 1: would you like to tell a bit about the project, and MKDF Records?
My friend Pietro Di, who now lives in London has always pushed me to commit more to music and when last summer I shared with him a bunch of tracks he was super enthusiastic and said: “Let’s do it. let’s make a record!”. And that’s how it all started.

We had met years ago in Milan, working for the same company – which wasn’t exactly a super-creative environment – and we clicked through a shared love for a certain kind of music, albeit coming from very different backgrounds. And by different, I mean that when we were kids I was playing hardcore punk in squats around Italy, while he was DJing at his uncle’s gentlemen’s club on the Italian Riviera…

So we decided to create MKDF Records to release underground dance music for 40-something years old people like us (LOL). Pietro has been very important in giving me the feedback I needed, for his support, and for helping with practical aspects of the label, too.

Musica da Discoteca was composed and mixed by me in my studio in Brooklyn, mastered in Italy by Dario Casillo, a friend who is a sound engineer (and producer too), and pressed in Italy by Mother Tongue. I took care of the design as well. The concept was to put together a few tracks with the same vibe but slightly different moods in a sort of dance music compilation as the title ironically refer.

I am interested in how the aesthetic of a specific period has always been influenced and shaped by the main technology at that time. I am attracted by discarded or obsolete technology, not for mere nostalgia, but to make a comment on society. That’s why I am also interested in archives and I collect a lot of ephemera (…) – M. Scozzaro 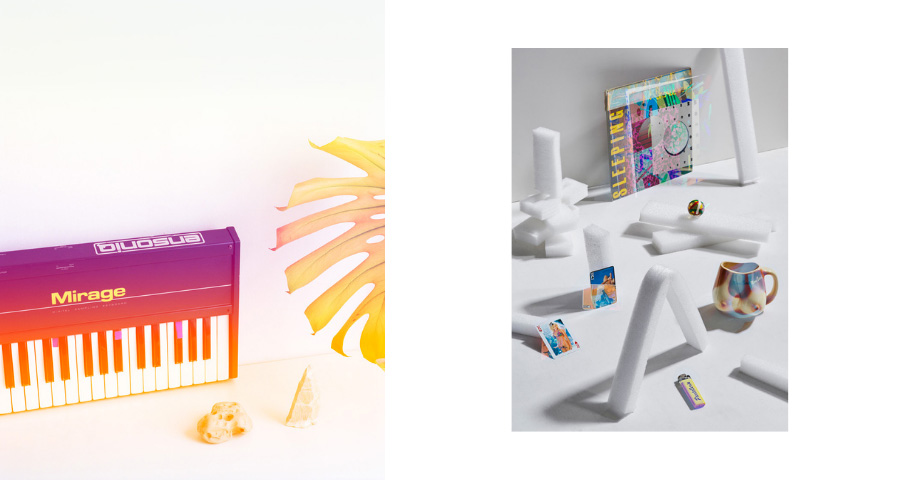 I personally enjoyed the vibe a lot. What kind of equipment did you use to produce the record? What’s your setup?
Thanks so much, I’m glad you’re diggin’ it! For this EP I mostly used an MPC 2000XL creating my own drum kits with samples taken from old records. In one track I used a TR-909 instead. Then I added bass, pads, and leads with a Yamaha DX7 synth, a Poly 800, or an Ensoniq Mirage. As you can see, not a fancy studio, but a few pieces of classic equipment with limitations and peculiarities that inspire a specific mood and sound.

I am interested in how the aesthetic of a specific period has always been influenced and shaped by the main technology at that time. I am attracted by discarded or obsolete technology, not for mere nostalgia, but to make a comment on society. That’s why I am also interested in archives and I collect a lot of ephemera, including records, magazines, books, stickers, flyers, posters, clothes, etc…

Electronic music, and especially the revolutionary production technique of digital sampling, has been an epiphany for me also in the way I make pictures. My work is very conceptual and is based on appropriating the language and the production techniques from music, media, and advertising, and using humour to show the limits of the language itself.

What’s in store for l’oggetto next?
The idea is to release more volumes of Musica da Discoteca, then we’ll see… I have quite a few unreleased tracks and I am producing more, and I would love to DJ more.

I have also started a couple of collaborations with other artists, but I‘ll probably use a different name for those projects as the vibe is slightly different.

And now, what about Digital Deli? You’ve been experimenting with visual nostalgia for a while now, isn’t it?
With Digital Deli I am observing my time and making a comment on society. What might seem visual nostalgia is because I am referencing the specific aesthetic of my upbringing in the ‘80s and ‘90s. It’s actually more like reclaiming that era, after seeing how Millennials and Gen Z kids interpreted it.

Starting from photography, and then expanding the concept to video, performance, public access TV, radio shows, live streamings, installations, and books, the project covered a broad spectrum of possibilities in the way I make art. My last show ”Did you have a nice day” at FMAV in Italy, is the result of that research, a big installation in a museum where my work also creates a dialogue with some archival material from the collections.

And it makes sense that the final chapter of this project is a limited-edition artist book that translates my visual world into a sculptural object, where the inventive use of page spreads allows recombining narrative between images.

As an estimator of your psychological research in photography, I found Digital Deli uncompromisingly linked to previous works. What has been the response so far?
Thanks for this thoughtful question. I am very glad that you noticed how the subject matter in my work has been the same, through different projects over time. I am deeply interested in identity and the psycho-sociological implication of modern living. My work explores my time and asks questions about how we live.

If in the past I have embraced a more documentary or existential approach, in recent years I have found humour more suited, maybe because I’m getting older. I like the idea that everyone can focus on different aspects of my work, making it accessible to a variety of people, which I find very stimulating.